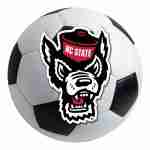 The Associated Press reports that a former soccer player who played for North Carolina State has filed a lawsuit in federal court in which he says he was sexually abused for years by the team’s former director of sports medicine under the guise of treatment. Filed by Benjamin Locke, the suit accuses Robert Murphy Jr. of improperly touching Locke’s genitals between August 2015 and may 2017. The alleged sexual misconduct occurred during massages that Locke states he later believed lacked legitimate medical necessity.

An unidentified male athlete is referenced in the lawsuit who is alleged to have told the North Carolina State Title IX office of his own claim during the investigation instigated by Locke’s report to university police. The lawsuit states that during the Title IX investigation, Locke discover that in February 2016, former head coach Kelly Findley is alleged to have told a senior athletics official that Murphy was, “engaging in contact with male student-athletes that he believe was consistent with ‘grooming’ behavior.”

Rober Murphy Jr. arrived at North Carolina State from Mercer in 2012. During his time at the university, he was moved to administrative duties in 2017 before being promoted to his role as associate athletic director in 2018. According to NC State, amid the Title IX investigation, Murphy was placed on administrative leave in January of 2022. In the complaint, it is stated that in June Locke learned that Murphy no longer worked at North Carolina State due to an “involuntary separation.” Reasons for Murphy’s leaving the university have not been disclosed.

According to a letter to Locke from NC State’s Office for Institutional Equity and Diversity, the Title IX investigation discovered, “a violation would have been substantiated via the preponderance of the evidence standard,” if Murphy remained at the school. The lawsuit states that Murphy admitted to university investigators that he touched Locke’s genitals with his bare hands but subsequently declined additional interviews.

At the time the abuse began, Locke was seeking treatment for a lingering groin injury. While Locke arrived on campus in January of 2015 at the age of 17, due to injury, he never played for North Carolina State. He transferred to Lipscomb, where he playing from 2017 until 2019 when he graduated. While working with trainers at Lipscomb he had a, “complete wake-up call” regarding how improper Murphy’s tactics felt. Locke said he dealt with anxiety and depression before seeking counseling in 2021 in order to cope with the lingering trauma of his abuse.

Choosing to “Bring Light” to Empower Others

As the AP article mentions, Benjamin Locke has bravely stepped forward in order to “bring light” to his story in order to empower any other potential victims to come forward. The team at Estey & Bomberger applaud Locke’s bravery in his standing up to his abuser. We also understand that many survivors of sexual abuse would rather choose to remain anonymous when reporting the crimes they have suffered.

Locke states in the article, ““I feel a lot of burden, I feel a lot of responsibility. As this happened five, six, seven years ago, I am still today realizing the effects that it has on different parts of my life. … There are moments where I’m like, ‘Oh, this is still impacting me and my relationship with my wife’ or the intimacy I have with her. Or the relationships I have with other people or my self-image and the perception I have of myself.”

Justice for Survivors of Athlete Abuse

This is why the team at Estey & Bomberger does more than simply provide our clients with top-class representation. As a trauma informed law firm, we understand the long-term damage caused by sexual abuse. We provide a number of resources beyond legal representation to our clients so that they can begin the healing process. Our team includes certified sexual assault advocates who can assist survivors in finding the help best suited for their individual needs.

We want our clients to not have to worry about whether they can afford our services, so we never charge a fee unless we win your case with a judgment, verdict, or settlement. Founding partner and athlete abuse attorney Steve Estey builds cases that are ready for trial.  Our law firm’s perfect record with athlete abuse cases illustrates Steve’s dedication to our clients. We are sensitive to the nature of athlete abuse cases and support our client’s wishes whether they choose to make their identity public, like Benjamin Locke, or would rather retain their confidentiality.

If you or a loved one is the survivor of an athlete abuse case, we offer confidential, free consultations where we can answer all of your questions regarding your case. This allows you to make an informed decision before choosing Estey & Bomberger to represent you. Our free consultations have no strings attached, and you are not obligated in any way to move forward with our law firm if you feel we are not the right fit for your needs. To learn more about how we can help you achieve fair compensation and justice, or to schedule a free, confidential consultation contact us today.