Mandy Meloon was only 13 years old when she was “discovered” as a rising star who would bring money and prestige to the USA Taekwondo team.

In the late ‘90’s, the sport was dominated by coaches Jean and Steven Lopez, brothers who are accused of drugging and sexually assaulting dozens of the girls they were coaching.

Six of those girls, now grown, sued the US Olympic Committee and USA Taekwondo for covering up their sexual assaults and failing to protect them from their predator-coaches. 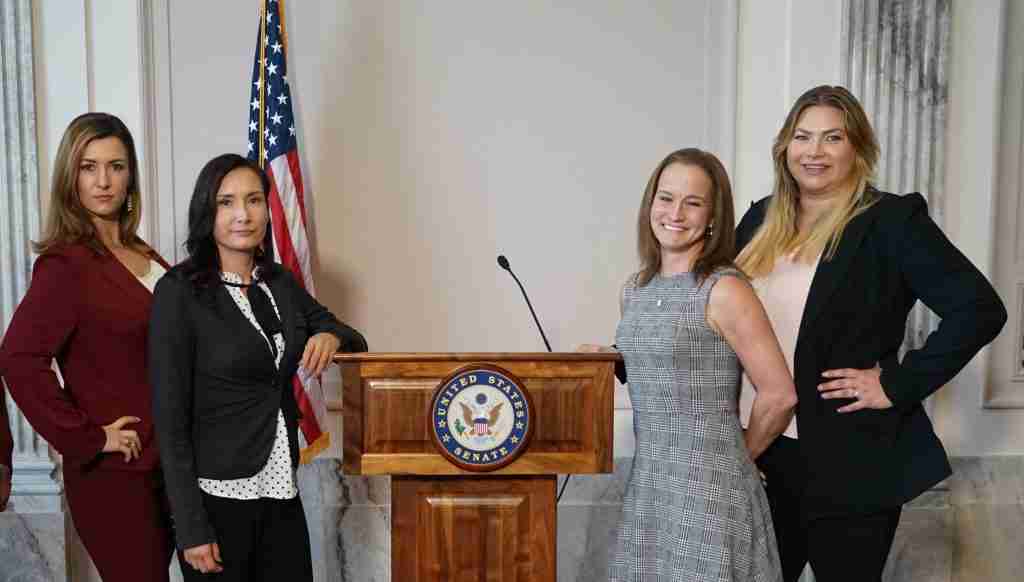 Gabriella Joslin, Mandy Meloon, Kay Poe, and Heidi Gilbert are four of the six taekwondo athletes who sued the USOC and USA Taekwondo.

Mandy Meloon was a plaintiff in the civil lawsuit, which was settled in December 2021 for an undisclosed amount by Estey & Bomberger partner Steve Estey.

“I love Steve,” Mandy said. “I have so much respect for him. The bottom line for me personally is that I reported my abuse in 2006 and it was covered up. I lost everything I ever worked for in one day – it was like a full-time job even though I was only 13. I was ostracized and blackballed. It was horrible. When Steve took our case, it was the first time I felt protected. Having him on my side legitimized my case and I knew he had my back no matter what.”

Mandy went on to say that Estey is “a nice guy but when he needs to be he’s a killer in the court room. I talk about Steve constantly to people because he and his team are pretty big time, they are the best at what they do, and they genuinely care.”

Mandy, who is now 41, was abused by Jean Lopez beginning in 1994, when she attended camp at the USA Taekwondo Center in Colorado. Her abuse continued every day until she left the team at age 27.

“I reported my abuse and the abuse of other underage teammates in 2006 and they threw me off the team even though I was number one in the world and the 2008 Olympics were just around the corner,” Mandy said. “I was homeless and on the streets since USA Taekwondo provided my housing, health insurance and paycheck. What saved me was I was so angry and the fact that I was screaming the truth for everyone to hear.”

That anger still simmers but Mandy said, “On paper, I’m doing amazingly well because of the settlement and being in trauma recovery. I’m a single mom, so now I’m able to provide the basics for my daughter without worrying for the time being. I consider this settlement the back pay USA Taekwondo owed me for all the years I lost. I did the math and It adds up to less than minimum wage year after year. But the lawsuit was never about the money. It’s about stopping sexual abuse.” 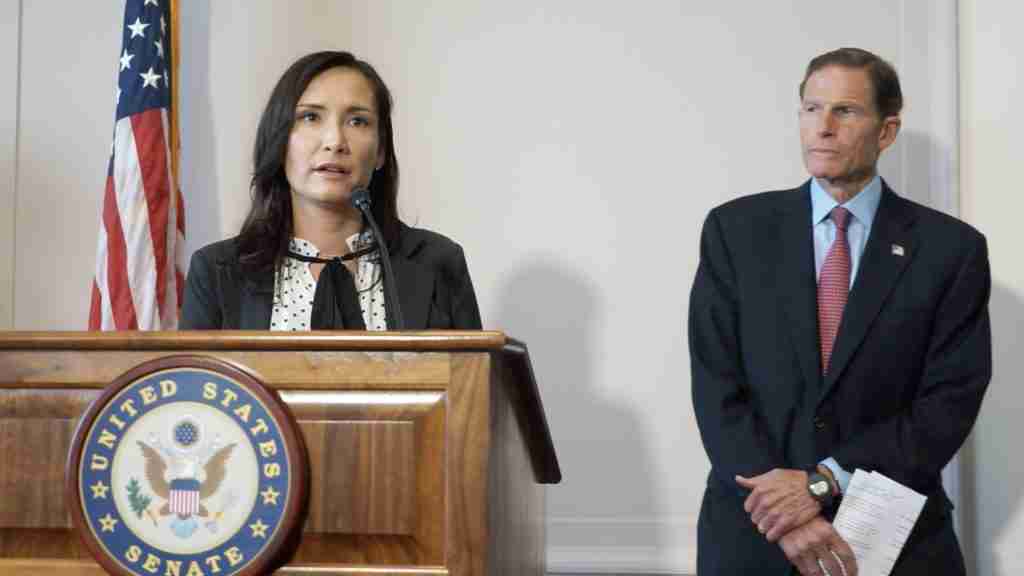 Mandy Meloon shares her story to bring awareness to the problem of sexual abuse in sport. She is pictured at a Washington DC press conference with Sen. Richard Blumenthal.

Because of the mental and physical trauma, Mandy expects to be in therapy and on medication for her entire life. “I’m still struggling with horrific PTSD,” she said.

Mandy’s 8-year-old daughter, meantime, is being taught to protect herself.

“I’m not crazy over-protective but I do have those conversations with her,” Mandy said. “Sometimes I get pretty graphic about the really ugly and realistic side of the world. I do want to scare her because I need her to understand what can happen. I tell her ‘you could be taken – even killed – and I would never find you.’ But the biggest thing I tell her is I don’t care if it’s a family member, sports coach, or an authority figure: nobody’s allowed to touch you or tell you to keep secrets from me. So, I’ve given my daughter the power to say no, even to me.”

She believes bringing an end to the sexual abuse problem facing both boys’ and girls’ youth sports starts at home.

“It really does start with the parents,” Mandy said. “To be super-successful in sports, you generally have to start really young. Taekwondo does have good coaches but it’s not regulated by any state agencies like a daycare center would be. The sport tends to really attract predators because of just the way taekwondo is traditionally set up: you have a master and you’re calling them master – it’s like you’re giving everything over to them. It’s just completely insane. It’s almost like a cult.”

Her advice to parents is to research their child’s coach, do a background check and “remember that you’re paying for a service. Also, watch out for red flags.”

The biggest red flags that a child is being groomed by a sexual predator include banning parents from workouts, the coach wanting to take your kids on trips without your supervision and refusing to accept payment for services, Mandy said.

“If something does happen, you need to immediately file a police report,” she said. “I get asked a lot ‘why aren’t there any criminal charges in my case?’ There should be because these are crimes. But in my case, they happened in other countries or the statute of limitations ran out.”

Mandy is satisfied with the results of her civil case and says coming forward and reporting her abuse was definitely the right thing to do.

“One of my sexually abused teammates committed suicide and I just couldn’t live that way anymore,” she said. “If it weren’t for my daughter, I would have committed suicide as well. The pain of trauma manifests itself physically and at times it can be unbearable. Something terrible could have happened to me from being on the streets after I lost everything in one day for reporting Lopez’s assaults. I was just lucky to have Steve Estey and his whole team on my side.”

Jean and Steven Lopez were once celebrated as Olympians who were masters of their sport. Now their medals are tarnished, their reputations ruined in the United States: the brothers were both banned from coaching taekwondo by the Olympic-affiliated SafeSport organization but, due to technicalities, their bans were overturned in the US. And they are appealing their ban by World Taekwondo, which controls the sport worldwide.

Even so, Mandy knows that Steven Lopez is still coaching.

“I recently saw a post on social media that Steven is in Italy, coaching underage athletes and conducting seminars. I want them banned for life permanently by World Taekwondo,” Mandy said. “I want World Taekwondo to make their investigation of the Lopez brothers public. Bottom line, I want them in prison. This is the last thing standing.”

To learn more about how the team at Estey & Bomberger can help you, contact us today:

Thank you for your trust. We will contact you within one business day.